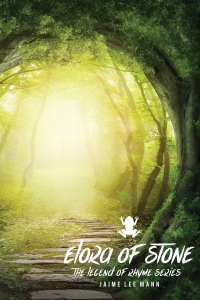 TORONTO – December 8, 2014 – Four-year-old Asher Caine vanishes while playing near the woods one day with his twin sister, Ariana. In the magical Kingdom of Falmoor, twins are cursed. Ever since the evil sorcerer Larque turned the good witch Elora to stone, all twins in the Kingdom are doomed to separate.

Now about to turn thirteen, Ariana learns that her brother is alive, and she must find him in order to save Falmoor. With their magical blood and powerful bond, the Caine twins are the only ones able to release Elora from her stone imprisonment. The twins are joined by a host of magical creatures such as pixies, fairies, goblins, and ogres as they attempt to stop Larque from spreading darkness throughout the Kingdom.

Elora of Stone is the first book in the Legend of Rhyme Middle-grade fiction series. Bookstores can order the book from Ingram and readers can download Elora of Stone Amazon’s Kindle store for $6.99.

Author Jaime Lee Mann lives on Prince Edward Island, where she works as a freelance ghostwriter. Elora of Stone will be her first publication with her own name on the cover, and started out as a bedtime story for Jaime’s two daughters. Jaime writes every day, as she has been doing since she was a child, and is currently working on the next two installments in the “Legend of Rhyme” series.

At Blue Moon Publishers, we publish fiction and non-fiction, from best-selling authors such as Amanda S. Jones under our Blue Moon Voices imprint.

We are also committed to literacy. Please see our Giving Back page for more information on programs that we are supporting from our profits. www.bluemoonpublishers.com