Last month saw the release of brand new Blue Moon Publishers title Rise of the Chosen by debut author Anna Kopp. On Saturday, November 19, Rise of the Chosen launched at Barnes & Noble Mentor. This book is the first in the multi-part “Lifeblood” YA dystopian series.

The three hour event at Barnes & Noble was well attended by friends and family, as well as customers within the store. Exclusive Rise of the Chosen bookmarks, stickers, buttons, and even branded cookies were present to entice fans. 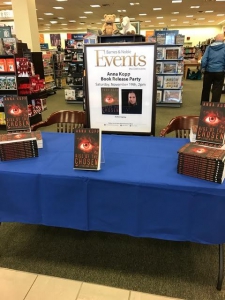 About Rise of the Chosen

In Sam’s world there are two rules. Rule #1: Nobody dies. Protect the living at all costs. Rule #2: Everybody dies. At least once.

The Waking was a global event in which a force called the Lifeblood invaded all humans who died. The few strong enough to control it came back as powerful immortals. The rest let the bloodlust take over and awoke with one goal – to kill.

Newly appointed Watch Guard Samantha Shields has a legacy to uphold. Her father died a hero defending their city and now she wants to follow in his footsteps. Except for the dying part, of course. Unfortunately, fate has other plans as she discovers deep dark secrets that make her choose between her loyalties and the lives of everyone in her city. Both rules are in play as Sam is forced to make hard decisions that could cost her everything – including the person she cares about most. 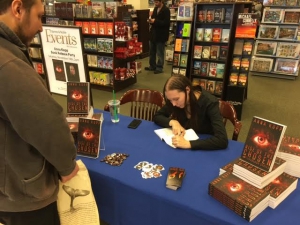 Thank You To All Supporters of Rise of the Chosen!

Blue Moon Publishers thanks all who came out to support Anna Kopp at her launch, and contributed to making this event such a success!

Have you purchased your copy of Rise of the Chosen yet? What did you think?