Diadem of Death and Hit the Ground Running Launch at Chapters Halifax!

This week saw the release of not one but two brand new Blue Moon Publishers young adult titles: Diadem of Death by B.R. Myers and Hit the Ground Running by Mark Burley. On Saturday, April 29, the books launched at Chapters Halifax. 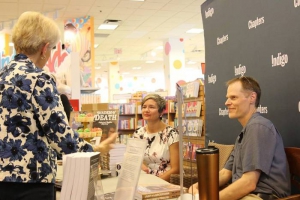 The event was well attended, and allowed B.R. and Mark the opportunity to read from their new books before signing copies for eager fans! Chapters Halifax provided treats and refreshments for the special event.

About Diadem of Death

Nefertari “Terry” Hughes is looking forward to spending the school break with her boyfriend, but when her archaeologist father announces he’s working on a project that will take him to Egypt, all hopes of having a romantic summer are buried.

Terry accompanies her father to Alexandria where she’s reunited with her first crush, Awad—all grown up and an expert in translating hieroglyphics. He confides that the team is in a race to find Cleopatra’s lost tomb before a secret band of rebels steals Egypt’s last Pharaoh and her diadem.

But sabotage and a deadly accident put everyone on high alert, and Terry isn’t sure whom to trust. As the line between ally and enemy begins to blur, Terry has to keep her wits about her and figure out who wants the diadem badly enough to kill.

Diadem of Death is the sequel to Asp of Ascension, and the second book in the Nefertari Hughes Mystery Series. 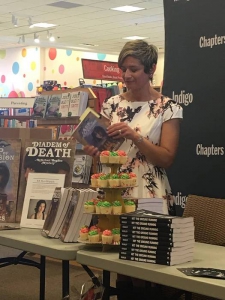 About Hit the Ground Running

“Eric—Mom and Dad are gone. I don’t know what happened, but I’m going to find out.”

Eric might not be getting along with his family—or anyone else, for that matter—but he’s pretty sure a boarding school in another country isn’t the answer. Skilled in parkour, running helps him deal. So be it, he decides. Do the time and get out. Flow like water. But when he gets a cryptic message from his brother telling him their parents have been abducted, and then his brother disappears, he realises they weren’t punishing him, they were hiding him. To find them, Eric has to discover the secrets of his parents’ research, but the conspiracy he uncovers threatens more than just his family. With help from unlikely new friends, a hack-first-ask-questions-later approach to computers, and a dangerous plan, he soon learns that some secrets don’t want to be found, and others have a way of revealing themselves at all the wrong times. 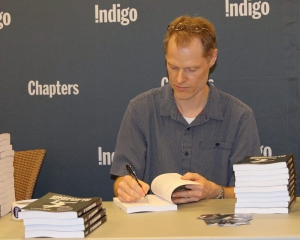 Thank You to All Supporters of Diadem of Death and Hit the Ground Running!

Blue Moon Publishers thanks Chapters Halifax and all who came out to support B.R. Myers and Mark Burley at their book launch, and contributed to making this event the success that it was!

Have you purchased your copy of Diadem of Death or Hit the Ground Running yet? What did you think?