Last week saw the release of brand new Blue Moon Publishers title Fall In One Day by Winnipeg author and illustrator Craig Terlson. On Thursday, May 25, Fall In One Day launched at McNally Robinson’s bookstore!

Winnipeg writer (A Large Harmonium) and English professor Sue Sorensen acted as emcee for the evening. After conducting a brief reading to a rapt crowd, Craig spent some time answering interview questions from Sue about the background of Fall In One Day and his writing process. The evening wrapped up with a book signing and refreshments. 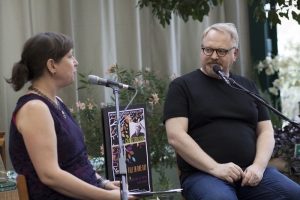 A few highlights from Craig’s interview:

Sue: The feel of the seventies is most definitely here

[in Fall In One Day], with great authenticity. How much research did you have to do, and how did you go about doing it?

Craig: This is really funny. I never thought I was writing a historical novel, I just kept reading these books—on Watergate, and on LSD (my son supplied me with a couple of rare great books)—but I was so fascinated with it, that it never felt like research. But when the reviewers started saying how much I nailed the time period, I was actually kinda surprised. So I guess I did do a lot of research, I read a lot. I was lucky enough to know a nurse who worked during the time of the LSD therapies. (Also married to a psych nurse, which was helpful.) The toughest thing was getting the slang right. The internet often argues about when certain phrases were coined. I lost track of how many times I changed that first line before I landed on “outtasite.”

Oh, And I listened to a lot of Steely Dan.

Sue: You have a great eye for visual detail: this novel is a great workout for the reader’s inner eye. This isn’t surprising, given what you do for your day job. Can you talk about how your work as a writer and your work as a designer interact?

Craig: I’ve thought about that a lot—and sometimes not at all—for sure being an illustrator/painter for all those years made me aware of things visually. And now as designer even more so. It’s my go-to, sometimes too easy. I can define something as Hooker’s green, and I know what that is. But writing is stronger when you get past the visual, so I work at getting other senses involved. So often I can start with the visual, but I have to go deeper to find what else is going on, besides what we see.

Sue: Friendship. This novel can be described in lots of ways, but from the beginning one of the strongest elements is the loyalty between these two friends, Joe and Brian. I figure friendship is pretty important to you, or you couldn’t write about it so well. Can you say something about that?

Craig: This was another thing that surprised me. That people comment on the friendships, I mean. I never set out to say anything about friendship (you shouldn’t really set out to say anything but tell a good story, actually)—but authentic relationships in my own life are really important to me. And I guess this comes through—and even more so “trust.” Who do we trust? How important is that in our relationships. (Hugely important to me.)

About Fall In One Day

In the summer of 1973, fifteen-year-old Joe Beck lives in a small Canadian city near the U.S. border where he watches dark-suited politicians lie on TV during something called Watergate. So when his best friend Brian goes missing, Joe has a hard time believing that adults ever tell the truth.

Joe learns that Brian left town with his father after Brian’s mother ended up in the hospital. He listens to the news reports for information, but nothing is being said. Eventually, Joe launches his own investigation, using a tape recorder—just like the American president—to help sift through the clues. Feeling that everything is up to him, Joe embarks on a perilous and enlightening journey to decipher a mental institution diary full of secrets about a drug called LSD, and uncover the truth about Brian’s father and save his best friend.

Thank You To All Supporters of Fall In One Day!

Blue Moon Publishers thanks all who came out to support Craig Terlson at his launch, and contributed to making this event such a success! 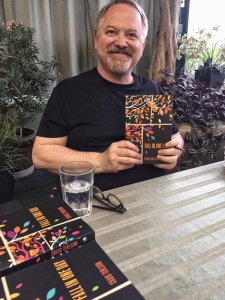