Last month saw the release of Blood and Stars, the fifth book in the bestselling middle grade Legend of Rhyme series by Jaime Lee Mann. On Saturday, September 23, the book launch event was held at Indigo Charlottetown, marking a return to Jaime’s Prince Edward Island roots. This series has been striking a chord with imaginative readers both young and old, particularly reluctant readers who are discovering the joys of a fantasy novel for the first time! 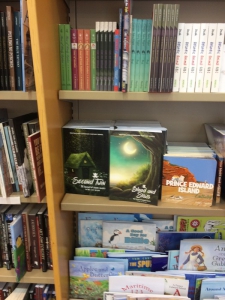 About Blood and Stars

Thirteen-year-old Ariana Caine has woken in Coraira, and is torn between finding her brother Asher and learning how to rule the magic realm while Calla is under a protection spell.

Beneath the sea, Starla the mer-queen is bringing her apprentice, Teagan, to the Chamber of Memories to learn more about her parents. But when Starla is beckoned by one of the Ancients, Teagan is approached by a stranger, who promises to lead her to her mother and father. Meanwhile, the sea witch and her sisters are poised and ready to usurp the queen’s reign, and will stop at nothing to gain her powers.

On top of it all, Elora, the infamous witch who has caused so much heartache, is now asking for trust one last time.

Will Ariana choose Coraira over her brother?

Will the sea witch have her wish?

What are Elora’s true intentions? 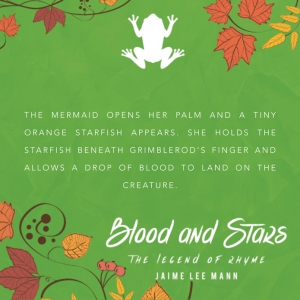 Inspiration for Blood and Stars

Blood and Stars picks up right where the prior instalment in the fantasy series, Second Twin, left off, and was inspired by Jaime’s desire to give her young readers a look inside the mind of her villain and provide some insight into what events may have transpired to make that character end up the way they did.

Jaime states, “When I started writing this series, I intended for the underlying moral to be that things aren’t always as they seem. After reading my books, I hope that young readers will think twice about judging people based on appearances alone.” 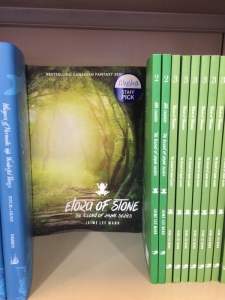 When Jaime Lee Mann was nine years old, she decided that she would be an author when she grew up. Many years later, Jaime’s children would beg her to tell them stories at bedtime. Sometimes her stories were silly and sometimes they were magical.The girls loved one of her magical stories so much that Jaime decided to write it down. That story would eventually become Elora of Stone, the first novel in the Legend of Rhyme series. JL (as her family calls her) lives in a pretty house in Prince Edward Island with her husband and two daughters. She writes every day and plans to do so for as long as people love to read her words.

Thank You to All Supporters of the Legend of Rhyme!

Blue Moon Publishers thanks all who came out to support Jaime at her fifth book launch, and contributed to making this event and series such a success!

What is your favourite book in the Legend of Rhyme?