Both events were well attended, and offered Kris an opportunity to perform music related to To Love A Stranger, read from the new book, present brief thank you speeches, and then sign copies for eager fans! The program including diverse works for piano from classical composers Scarlatti, Brahms, Beethoven, Ravel, and Chopin. 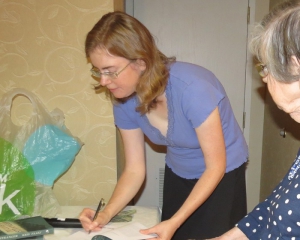 About To Love A Stranger

Sam and Jeannette have two things in common: a passion for music and a need to escape from themselves. In the fall of 1986, when President Reagan is in his second term, Elton John plays on the radio, and Spike Lee is conquering the box office, Sam and Jeannette meet in Virginia. Both of them have landed their first job with the Richmond Symphonic Artists, a small orchestra that’s fighting to survive.

Jeannette, fragile and shadowed by demons from her past, quickly falls in love with the charismatic and brilliant Sam. She thinks he will bring her stability and redemption. But she doesn’t know that he has secrets of his own, especially that the mystery disease AIDS, the so-called “gay plague” that fills the news and terrifies the American public, could touch his life.

As Sam and Jeannette struggle to save their orchestra, they look for deliverance in each other. But their past secrets—especially Sam’s—threaten to destroy the future they’re trying to build. 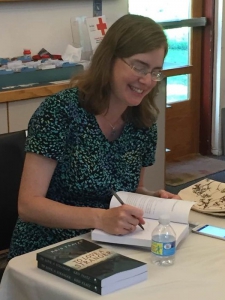 Inspiration for To Love A Stranger!

To Love A Stranger was inspired by Kris’s work as a professional musician. When she was studying for her Master’s degree at the Peabody Conservatory in Baltimore, she immersed herself in classical music, especially the backstage world of the professional symphony. The excitement, energy, and kaleidoscope of personalities in the symphony’s orbit fired her imagination and provided the seed for To Love A Stranger.

Kris states, “When I started writing Stranger, all I had was a character I desperately wanted to put on the page. As I worked on the book over the years, it took on a life of its own, dealing with larger issues of prejudice and social justice, and also getting out a message about classical music. Classical performers across the United States are having a tougher and tougher time getting audiences. This music can thrill, empower, soothe, cheer, transform: we can’t sit back and let it fade into obscurity. With Stranger, if one reader gets interested in this particular musical world, if one person buys a concert ticket or listens to a recording they’ve never heard before, I’ll feel I’ve done my job.” 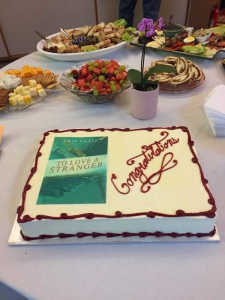 Thank You To All Supporters of To Love A Stranger!

Blue Moon Publishers thanks all who came out to support Kris Faatz at her launches, and contributed to making these events such grand successes!

Have you purchased your copy of To Love A Stranger yet? What did you think?