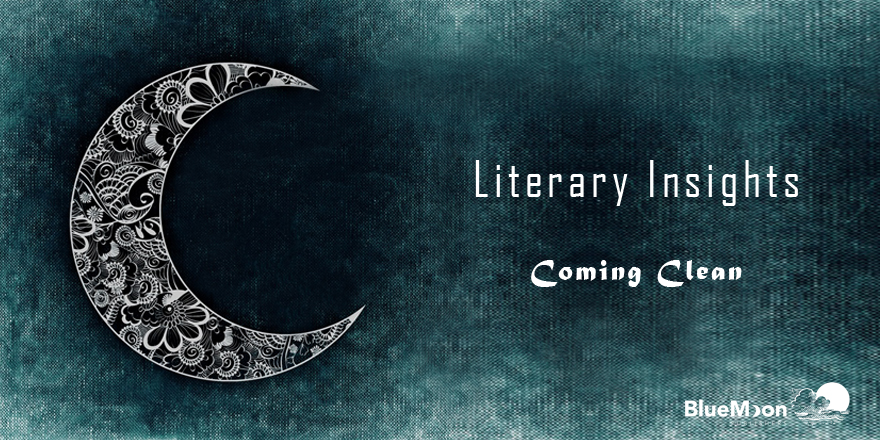 Kimberly Rae Miller has mixed feelings about reality television shows that spotlight hoarding. While they bring awareness “to an illness that has for so long been swept under the rug,” tv viewers “only see glimpse of people with this disorder—and usually it’s during their worst-case scenario.” They laugh, they gag, and they cringe, but they do not see the people behind the disease.

In Miller’s Coming Clean (Houghton Mifflin, 2013) and Jessie Sholl’s Dirty Secret:  A Daughter Comes Clean About Her Mother’s Compulsive Hoarding (Gallery Books, 2011) daughters of hoarders take us behind the superficial world of tv-reality shows to get to know their parents as people they love who have a diagnosed mental illness.  In the Writers’ Notes, I offer suggestions for writing about family members.

Hoarding was first diagnosed in 1996 by two American doctors. For many years it was believed to be associated with Obsessive Compulsive Disorder (OCD).  In 2013 hoarding was officially given its own distinction as a disorder by the American Psychiatric Association.  The Diagnostic and Statistical Manual of Mental Disorders (DMS) defines hoarding disorder as a “conscious, ongoing urge to accumulate possessions, as well as corresponding feelings of anxiety or mental anguish whenever those possessions get thrown away.” Hoarding affects 2-5% of the population worldwide.

The memoirs written by Scholl and Miller blend factual information about hoarding disorder with honest but compassionate accounts of their personal experiences coping with parents who are hoarders.  Both writers have spent countless hours cleaning their parents’ houses (often with the aid of shovels), researching the disorder, communicating with Children of Hoarders support group members, and ultimately finding peace in the realization that they cannot “fix” the problem. 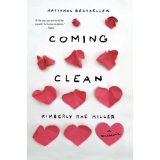 Miller grew up surrounded by piles of junk collected by hoarding parents, who often moved from place to place, leaving almost everything behind as they began cluttering a new place. She writes:

Between my father’s love of paper (and just about everything else he could get his hands on) and my mother’s depression-fueled shopping, our house had started to resemble the remnants of the bottom of the garbage can. Soggy junk filled our living space. When I was fourteen, the boiler broke in the middle of winter, but we could never allow a repairman into our mess, and so we lived without heat, without showers. (p. 91)

Like many children of hoarders, Miller grew up with “doorbell dread,” the fear of someone arriving at the door and discovering her family’s secret. Although she grew up with rats, fleas, and maggots, it was the shame she experienced that was the most difficult part of her childhood. In an interview with The Daily Beast she said:

The hard thing was in knowing my normal was really, really abnormal for the rest of the world. I always felt this compulsive need to hide who I really was from the rest of the world. So no one would ever see my house or see our car because there were things in our car. I was incredibly shy as a child because I just didn’t want to be noticed. I didn’t want to bring attention to me or the way we lived.

Miller survived by spending as much time away from home as possible. During her senior year of high school Miller saw a report on the evening news about a family “living in filth.” It was the first time she had ever heard the word “hoarding.” Although her mother denied the label, to Miller it was a relief to have a word to attach to her dysfunctional family and to know “that we weren’t alone in this.” (p. 101)

Not until she was away at college did Miller begin to have a normal life:

No one there knew about the hate-fueled letters our neighbors left in our mailbox. They didn’t know how much I appreciated cafeteria food after having spent most of my teenage years eating hermetically sealed, chemically laden foods, because our kitchen had been left to rot under cobwebs and maggots. I no longer had to plan meetings with friends so they wouldn’t know where I lived. There would be no more walks down the block to stand in front of a stranger’s home when someone announced they were on their way. I loved being able to shower without fear that rotten pipes would create a flood. For the first time in my life, I felt normal. (p.108) 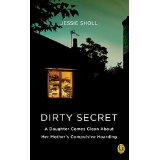 As Sholl was growing up her mother was chronically disorganized and untidy. Her mother’s full-blown hoarding behavior, however, did not emerge until her long-time partner died (traumatic events, Sholl points out, can offer trigger the hoarding instinct). Walking into her mother’s house later, Scholl discovered a familiar mess that looked like “the remains of a village buried by lava, the evidence of my last cleanup attempt lives on underneath” (p. 14). But this time the clutter has “entered the realm of pathological: plates full of hard-as-a-rock spaghetti, containers of motor oil, calculators and flashlights and key chains still in their packaging, knitting needles, magazines, bunches of brown bananas, and fast-food soda cups bleeding brown stickiness” (p. 15).

My mother is a compulsive hoarder. She’s one of those people who dies because the firemen couldn’t get through the piles of newspapers and clothes and books and hoes and garbage, whose junglelike lawn makes the whole block look shoddier, whose friends and neighbors are shocked when they finally see the house’s interior: They had no idea their friend/daughter/nurse/teacher lived that way. They had no idea anyone could live that way. Yet an estimated six million American do.

I’ve long searched for the perfect concoction of begging, conniving, and bribing that would finally make my mother throw out the trash and keep her house clean. Because I know that if I could get her to unclutter her house, her cluttered mind would follow: Somewhere under all the filth is a reliable mother, a consistent and compassionate mother; somewhere under the heaps of moth-eaten sweaters and secondhand winter coats, the cardboard boxes kept because they’re “just such good quality,” the jar after jar of unopened jumbo-sized facial scrubs and green clay masks and aloe vera skin creams, the plastic forks, and dirty paper plates and gum wrappers and dried-out pen and orphaned Popsicle sticks. Every surface covered, crowded with layer upon layer of stuff. I know she’s in there; I just have to find her. (p. 3)

Children of hoarders often fear that they will “catch” the disease. But Sholl happily writes that she practices the opposite of hoarding:

I save nothing. I’ve given away stereos, televisions, vintage love seats, bookcases. I can’t find my diploma from graduate school and I have a feeling it ended up in the garbage during one of my purges. I even love getting to the end of a bottle of shampoo or conditioner, or a tube of toothpaste. It’s exciting to throw things into the recycling bin or the garbage. Whenever I buy a new article of clothing I toss something else to make room. I get a thrill each time I discard something. Getting rid of things is liberating.

Writers of memoirs “pay the price of transparency,” writes Joy Castro in the Introduction to Family Trouble: Memoirists on the Hazards and Rewards of Revealing Family, “and the cost can become particularly dear when they write about family.”

“The quarry of family secrets has a deep end, full of darkness and uncertainty,” writes Dintt Moore, “and writers who dive down into that material are going to have to learn to swim, and breathe underwater, while still holding their eyes wide open.” (p. 94)

But, if the 28 memoirists whose essays are included in Family Trouble are representative, these writers would agree it is worth the price to seek the truth in writing memoirs for these reasons, among many:

Discovery: Writing memoirs is a process of “working toward discovery,” writes Bich Minh Nguyen, author of Stealing Buddha’s Dinne. It is a process during which writers gain new insights into issues and memories they may have never been aware of that become clearer during the writing process. “I write about my family,” says Heather Sellers, “in order to light the dark rooms we’ve lived in, and to create rooms that might hold something of the complexity of what can’t be explained or understood” (p. 210). To avoid writing memoirs for fear of offending family members is to miss that opportunity and to risk allowing the past to be lost.

Liberation: Writing memoirs which reveal family secrets, such as hoarding, are also liberating for authors who feel like they have led double lives. Revealing the other side of the story is like lifting a veil, lightening a burden. Sue Silverman writes that memorists have no obligation to protect the privacy of their families, especially when abuse is involved. “I am owner of all the secrets that dwell in the attic of my mind,” she writes. “As owner, I’m free to reveal them. Since my family was involved in the creation of my secrets, I feel justified, even obliged, as a writer to reveal the roles they played.” (p. 202)

Helping Others: Women want to read about other women’s experiences in order to better understand their own, writes Silervman. In writing openly and frankly about family issues in their memoirs, women are helping each other. “All I can do, as a woman and as a writer, is to write from my heart and tell my truths without worrying about the reaction of friends and family,” she states. (p. 206)

The memoirists included in Family Trouble would agree that memoirs should be shared with family members after they are finished and deal with the fallout. Miller feared her father would be angry when she allowed him to read her book proposal. Instead, his response to her was, “Wow, that’s quite a story. I’m sorry that it was yours.” (p. 252)

Have you ever written about a family member?