Kris Faatz reads from her new novel, To Love A Stranger

How well do you know the person you love most?

Last month, debut author Kris Faatz attended the Kenyon Review Writers Workshop in the honoured role of a Fellow. Kris performed a reading from her new book To Love A Stranger, and sold out of copies at the reception! 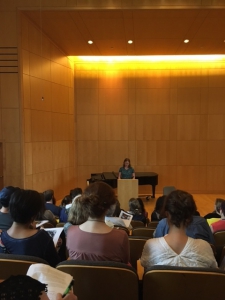 The Kenyon Review Writers Workshop had a major influence on Kris’ writing, and she’s returned there year after year to continue to hone her craft. We asked her what it was like to be invited back as a Fellow:

“The first time I came to Kenyon, six years ago, I knew so little about writing, and the Fellows were incredibly accomplished,” says Kris. “It’s amazing and surreal to come back as a Fellow myself. Kenyon transformed my writing, and I’m honoured to have this opportunity.” 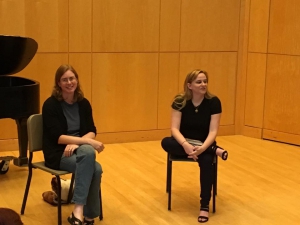 About To Love A Stranger

Sam and Jeannette have two things in common: a passion for music and a need to escape from themselves. In the fall of 1986, when President Reagan is in his second term, Elton John plays on the radio, and Spike Lee is conquering the box office, Sam and Jeannette meet in Virginia. Both of them have landed their first job with the Richmond Symphonic Artists, a small orchestra that’s fighting to survive.

Jeannette, fragile and shadowed by demons from her past, quickly falls in love with the charismatic and brilliant Sam. She thinks he will bring her stability and redemption. But she doesn’t know that he has secrets of his own, especially that the mystery disease AIDS, the so- called “gay plague” that fills the news and terrifies the American public, could touch his life.

As Sam and Jeannette struggle to save their orchestra, they look for deliverance in each other. But their past secrets—especially Sam’s—threaten to destroy the future they’re trying to build.

A beautiful debut novel filled with human emotion and an undeniable passion for music, To Love a Stranger explores a story of love and personal redemption that is impossible to forget.

Have you attended a writers workshop that had a major influence on your work?